Posted by Climate of Concern on Oct 9, 2017 in climate change | 0 comments

Africa is one of the most vulnerable continents to climate change. This situation is further worsened by its poor state of economic development and low adaptive capacity

Agricultural production in many African countries and regions will be severely affected by climate change. Agricultural losses are estimated to be possibly severe for several areas (like the Sahel, East Africa, and southern Africa) accompanied by changes in the length of growing periods impacting mixed rain-fed, arid and semi-arid systems under certain climate projections. In some countries, yields from rain-fed agriculture could be reduced by up to 50% by 2020. This will lead to loss of livelihood and social anarchy amongst the people.

Climate change will result in a loss of species and extinction of many plants and animals. Changes in a variety of ecosystems are already being detected, particularly in southern African ecosystems, at a faster rate than anticipated as a result of a variety of factors, including the influence of climate change.

Some regions in East Africa have become drier due to changes in land use pattern and climate. Water sources are becoming intermittent or disappearing; streams that used to run year-round are now seasonal. By 2020, some assessments project that 75-250 million people are estimated to be exposed to increased water stress due to climate change. Some assessments, for example, show severe increased water stress and possible increased drought risk for parts of northern and southern Africa and increases in run-off in East Africa. Water access is, however, threatened not only by climate change, but also by complex river basin management. This, coupled with increased demand, will adversely affect livelihoods. Changes in the ecosystem have also had significant impact on wild sources of food which have become hard to find.

Human health, already compromised by a range of factors, could be further hit by the negative impacts of climate change and climate variability (for example, previously malaria-free highland areas in Ethiopia, Kenya, Rwanda, and Burundi could also experience incidences of malaria by 2050s,
with the conditions for transmission becoming highly suitable by 2080s). 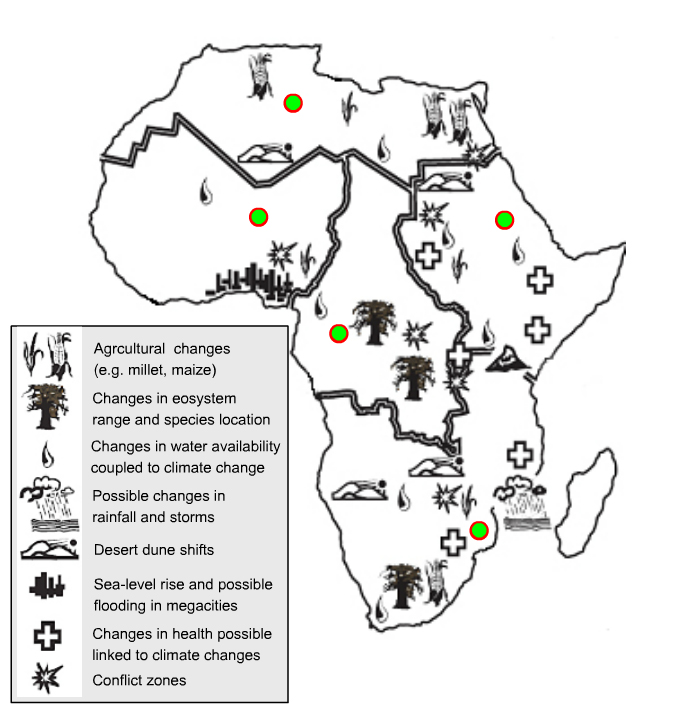